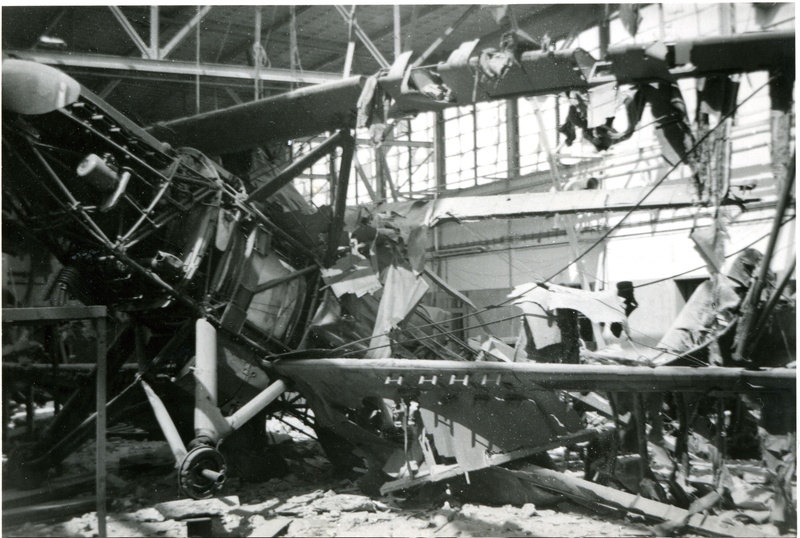 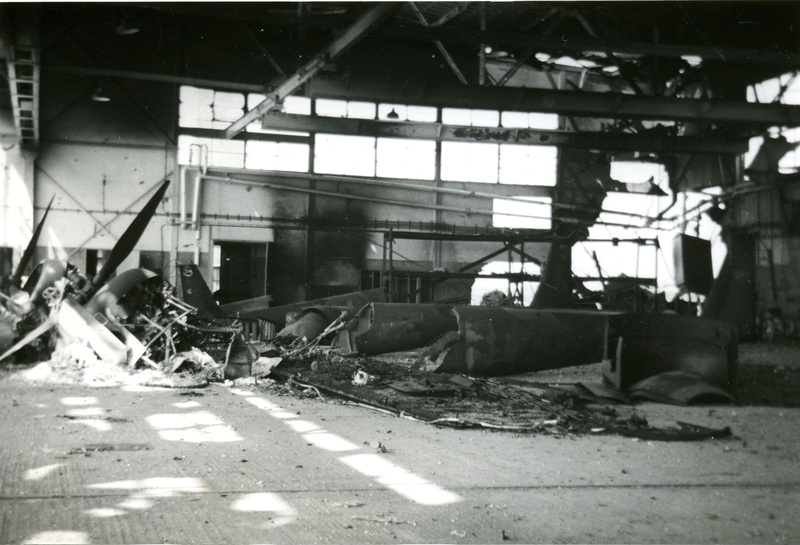 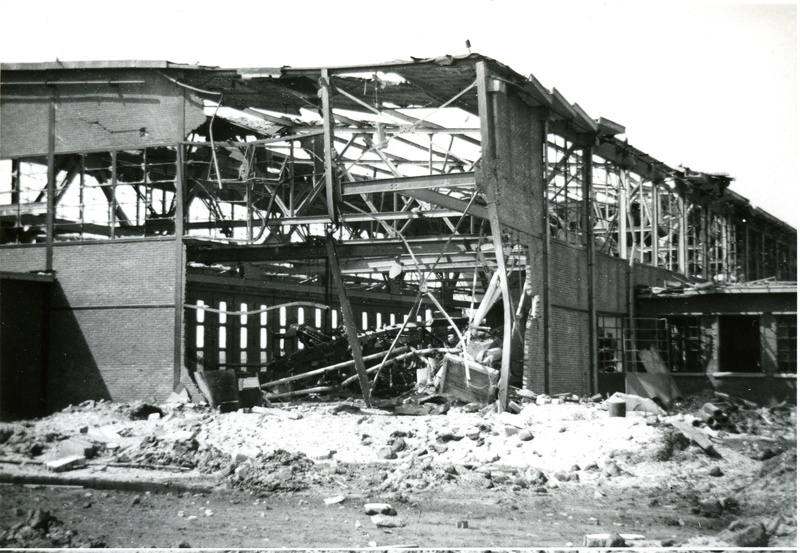 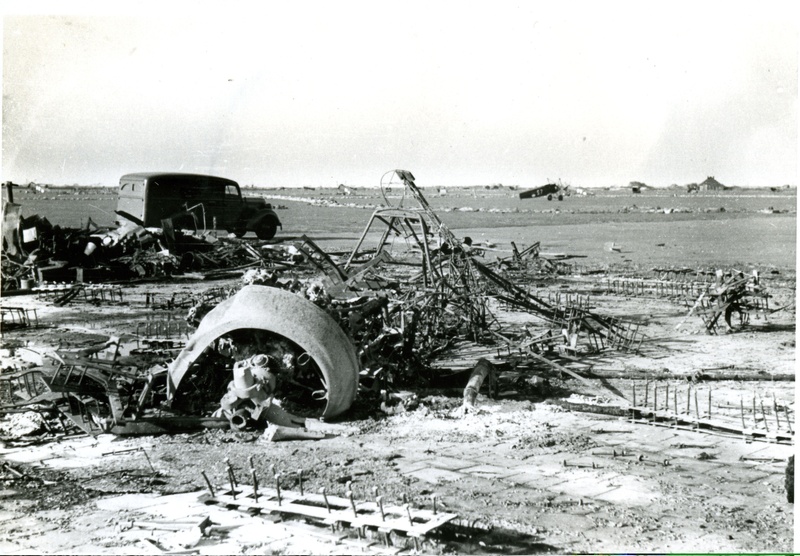 As you can see above, virtually all of our Air Force bases had been bombed to pieces. The Nazis had blown almost all of our Military aircraft and runways to smithereens. We did not expect to be attacked so all of our Air Force planes were on the ground and so virtually all of them were destroyed while still on the ground in that first attack. At the end of day one of the war, Holland had one bomber and two fighter planes left to defend our country against the overwhelming military might of Nazi Germany.!

Three days into the war, in these shambles and facing gruesome German aggression, Dutch Air Force pilot, Bodo Sandberg, my Dad, was called into action on May 13, 1940.

He had to fly one of the two G-1 fighter planes we still had, to protect our last T-5 bomber against a deluge of German Messerschmitts.

Their mission was to bomb our own "Moerdijk" bridges over the wide estuary of the "Haringvliet", to hold back the German invasion (a totally defensive move).

In the full awareness that he was likely to die that day, as his chance of survival was virtually NIL, he hugged my mother who, at that point, was seven months pregnant of my older brother. In an intensely tearful goodbye Dad said "it's so sad! I will never know my child, I don't even know if it's a boy or a girl". But, he went to work that morning and he  flew his mission anyway and heroically. 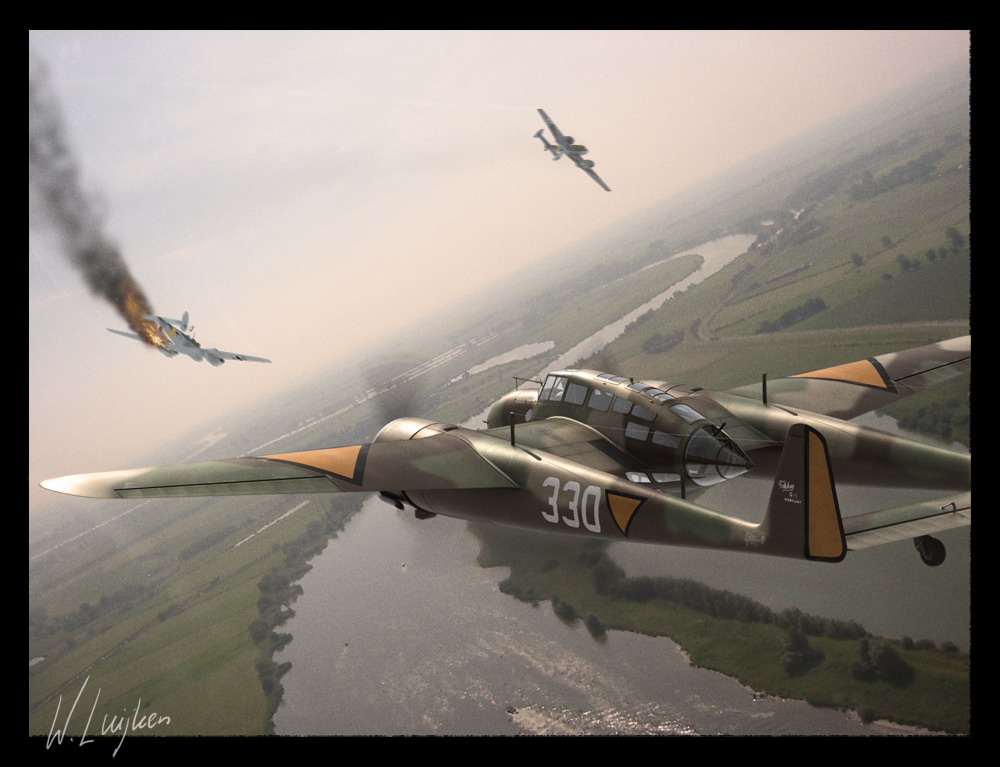 Above: Bodo Sandberg in his Fokker G-1 fighter plane defending our country

Below: Invading Germans with heavy machine guns at the Moerdijk bridges 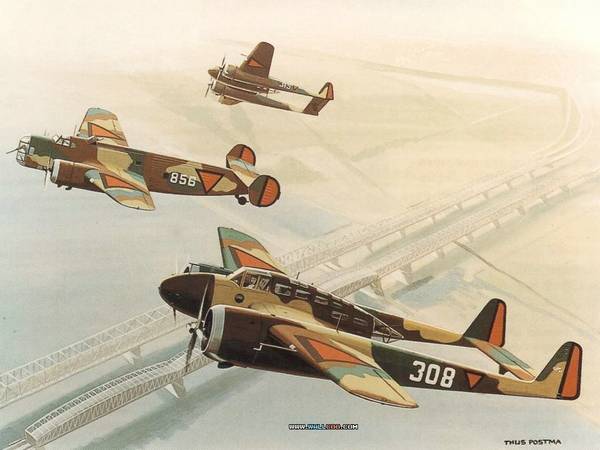 Above is a painting by Thijs Postma, showing the attack on the Moerdijk bridges on May 13, 1940, our attempt to prevent the German armored divisions from crossing the big rivers and invade their way into the Netherlands (it was a purely defensive operation, only to destroy our own bridges; our squadron wasn't even out to kill invading enemy personnel). This was the last attack by a Dutch bomber, a Fokker T5 (and also the last Fokker T5 bomber the Dutch had left, three days into the war). The T5 bomber was protected by two Fokker G-1 fighters. One was flown by Lt.vl. Sandberg with Srgt. v.d. Breemer and the other by Lt.vl. Schoute with Srgt. Lindner. The crew of the Fokker T5 bomber where Lt. W.F. Anceaux,   Lt .B. Swagerman, Srgt. G.A. van Riemsdijk, Srgt. O.W. Douwes-Dekker and Sldr.-gunner J. Wijnstra

Dreadfully, just beyond Dordrecht, the small Dutch squadron was attacked by nine Messerschmitt fighters! Three of the Messerschmitts attacked the T-5. The other six split up and attacked the two G-1s. The T5 went down in flames and crashed in the Grienden along the Noord, near Ridderkerk . All five of its crew members perished. According to unconfirmed reports Wijnstra and Fist Officer Douwes Dekker may have initially survived the crash. With their clothing ablaze they scrambled to reach the water but, despite being helpless - and harmless - on the ground at that point, they were shot and murdered from the air by the Nazi gunners in the Messerschmitts. On May 15th, Hans Metzlar, a flight observer during some of the previous six flights of the T-V 856, decided to honor his fallen comrades. He drove the DKW, Swagerman had left behind, from Schiphol airport to Aalsmeer (today the largest flower-auction in the world) to get flowers for the graves of his fallen friends. Ten minutes later, the back seat of Swagerman's DKW was "snowed under" with carnations and chrysanthemums, with which the little car had spontaneously been filled to the brim!! During the funerals on May 16th, our fallen heroes' graves were covered with those flowers. 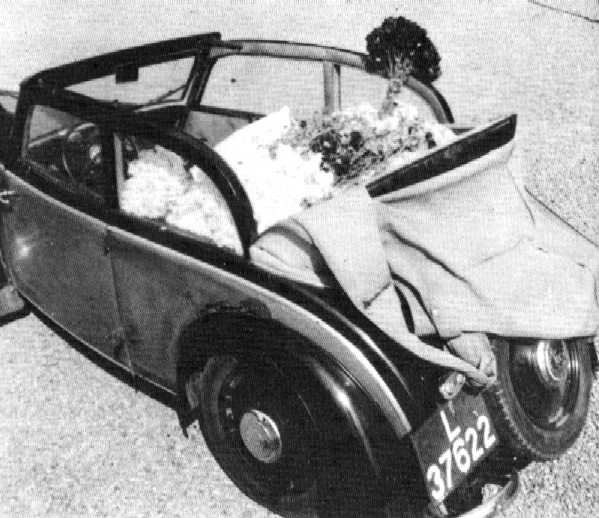 The other G-1 was also shot down and crashed in a polder at Nieuw-Lekkerland. Pilot Sgt. Paul Schoute perished in the violently burning wreck. Hans Lindner was thrown out of the plane and ended up against the verge of a waterway with his leg shot off. His hair still burning. Someone rushed to help him, extinguished it with water from the canal, but he died shortly thereafter.

These two hero aviators were initially buried in Nieuw-Lekkerland, but were re-buried a month later.

Only one G-1 fighter plane, in this mission that was so vital in Holland's desperate defense against the Nazi invaders, managed to outfly the onslaught of the German Messerschmits. Shot by the machine guns from the Messerschmits, Sandberg was bleeding from bullet holes through his leather pilot's jacket, but he found a cloud in the air in which he could hide his plane and, thanks to that cloud, he managed to escape from the German attackers. Not for long though, as his plane had taken fire as well and was on fire. He could not make it back to base. Miraculously he managed to keep his damaged plane in the air long enough to make an emergency landing on the highway between the Hague and Amsterdam. It was a close call but Sandberg and his crew-member v.d. Breemer, albeit it badly wounded, survived this mission. Sadly, they were the only two.

After the May days Sandberg managed to make his way to England. From there he was sent to the Royal Netherlands Military Flying School in Jackson, Mississippi. On January 26 1944 he was awarded the "Brevet Waarnemer" (a special Pilot's License), and on February 15, 1944, he was transferred to the Air Force in Australia. He had completed the Pilots training (AT- and OT-fighters) for classes J-III and J-IV, and he was assigned to the No 120 (NEI) Squadron with P-40 fighter planes.

Bodo Sandberg who survived fighting on two fronts (first in the Netherlands against the Nazis and then in Australia, New Guinea and Malaysia against the Japanese!) lived to be 90.         He died on May 2, 2005 and was cremated on May 4, by coincidence, although as if by fate, on the Dutch National day of mourning for our fallen heroes; the one day a year on which he, his wife, and two sons would stand on top of the dunes along the Dutch shoreline, look out over the North Sea, watch the sun set into the sea, and honor our heroes. The very special day on which he so deeply and dearly remembered his fallen friends.

Amongst others, Jhr. Bodo Sandberg was awarded the "Kruis van Verdienste" (the "Cross of Merit") and the "Vliegers Kruis"(the "Flying Cross"), both Knight's Orders awarded    "for valor, facing enemy action" by H.R.H. Queen Wilhelmina of The Netherlands.

In the 1947 picture below, Bodo Sandberg receives the "Ereteken voor Orde en Vrede" awarded to him by H.R.H. Queen Juliana of The Netherlands. 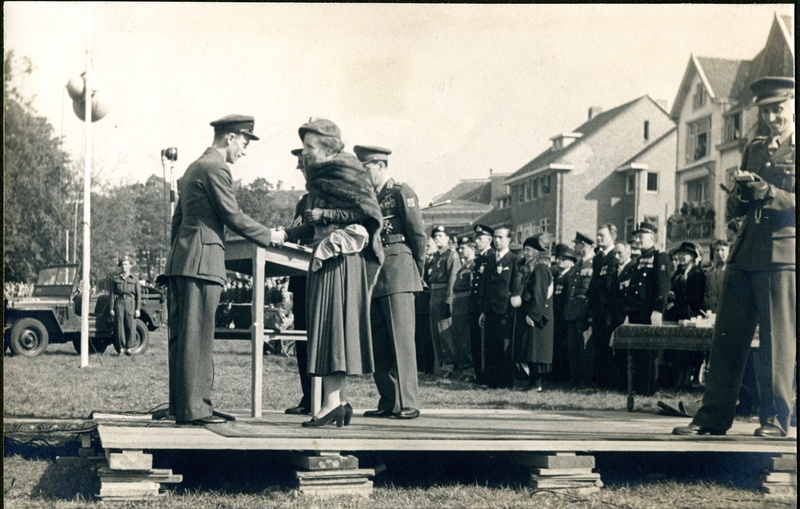 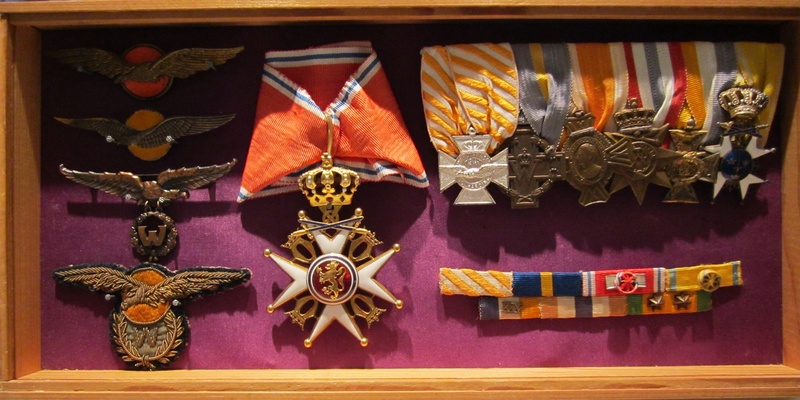 The large medal, the Royal Norwegian Order of St. Olav, the kingdom of Norway's only order of chivalry between 1904 and 1984, was awarded to Jhr. Bodo Sandberg by King Olav of Norway. It was awarded to individuals as a reward for remarkable accomplishments on behalf of the fatherland and humanity.

Bodo rarely, if ever, talked about the war.

He had locked those gruesome memories away; very deeply away!

My brother Steven was born in August 1940 and remembers more than I do. Obviously... I wasn't even born those days. I was born on March 23, 1946, so I was very little when I heard bits and pieces of Dad's story. Steven helped me a lot, filling in the blanks. In writing this story I may therefore not be exactly accurate in what I remember, but Bodo lived through some shocking and astonishing experiences, that should not be forgotten. They are worth remembering, even if Bodo himself tried as hard as he could NOT to, as future generations - like my own children - can learn from them.

"Lesson to be learned":