Meanwhile back in Holland - 1944: The ?Hunger Winter?, TERRIBLE times

Dad had faced terrible times, first being overrun by the German invasion, then escaping to England, and later fighting against the Japs in New Guinea, but Mom and Steven, back home, had to endure even harder times. 1944 was ?The Hunger Winter? in Holland.

Near the end of World War II, food supplies became increasingly scarce in the Netherlands. After the landing of the Allied Forces on D-Day, conditions grew worse in the Nazi-occupied Netherlands. The Allies were able to liberate the southern part of the country, but their liberation efforts came to a halt when Operation Market Garden, their attempt to gain control of the bridge across the Rhine at Arnhem, failed. The seizure of the approaches to the port of Antwerp (the "Battle of de Schelde") was delayed due to Montgomery's preoccupation with Market Garden.

After the national railways complied with the exiled Dutch government's appeal for a railway strike starting September 1944 to further the Allied liberation efforts, the German administration retaliated by placing an embargo on all food transports to the western Netherlands.

By the time the embargo was partially lifted in early November 1944, allowing restricted food transports over water, the unusually early and harsh winter had already set in. The canals froze over and became impassable for barges. Food stocks in the cities in the western Netherlands rapidly ran out.

There was no food nor coal or wood to burn to keep the house warm (http://en.wikipedia.org/wiki/Dutch_famine_of_1944).

When the allied forces finally liberated Holland, the troops were stunned to find many houses with no interior doors or trim left: everything and anything combustible had been burnt to survive the brutally cold winter of ?44.

Likewise, there was nothing to eat! The Dutch, in their despair, ate tulip bulbs, just to stay alive.... 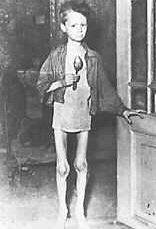 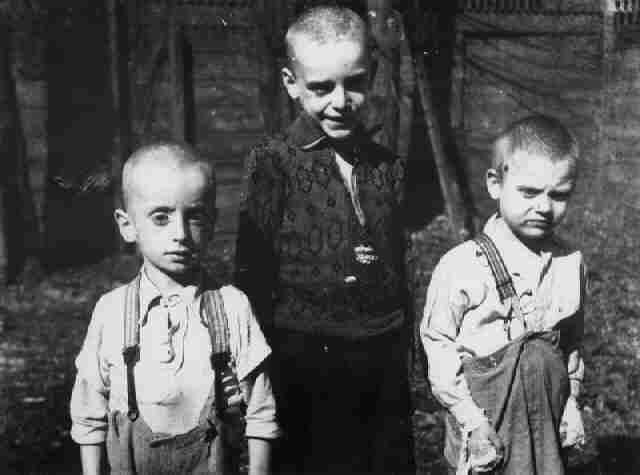 Mom joined ?de Ondergrondse?, the Dutch resistance to sabotage, undermine, and ? hopefully one day ? defeat the ?Moffen? (?Moffen? was the worst Dutch swearword, filled with revulsion and disgust the Dutch had for the Germans). On her bicycle (amazingly she still had hers, as most bicycles were confiscated by ?de Moffen?!) she would go to an illegal print shop where they counterfeited ?Food Stamps?

which she would distribute to poor souls that were even worse off than Mom herself. Extremely dangerous thing to do!! If the Germans caught you, the soldiers would routinely put you against a wall and machine gun you down on the spot (I remember seeing bullet riddled walls after the war).

And brave she was, as illustrated by her climbing into a flimsy "Tiger Moth" bi-plane, with a broad smile on her face, to fly with Bodo, her beloved hero aviator: 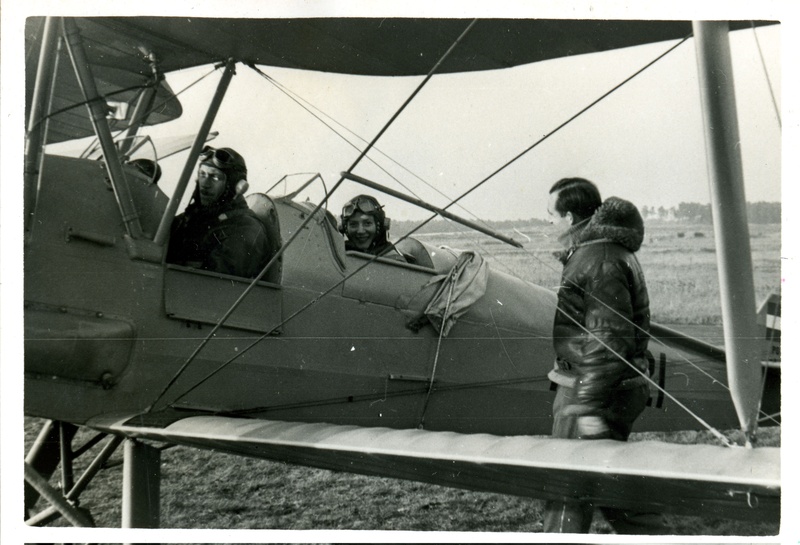 But Mom, brave as she was in ?de Ondergrondse?, didn?t have enough to feed her own family or herself. She ended up so under-nourished that she got a very dangerous infection in her central spinal cord and became paralyzed from the waist down!

In search of food people would walk for tens of kilometers to trade valuables for food at farms. Tulip bulbs and sugarbeets were commonly consumed. Furniture and houses were dismantled to provide fuel for heating. From September 1944 until early 1945 approximately the deaths of 10,000 Dutch people were attributed to malnutrition as the primary cause, many more as a contributing factor. By April 1945 about 20,000 Dutch people had died of starvation.

The Dutch Famine ended with the liberation of the western Netherlands in May 1945. Shortly before that, the German occupiers allowed coordinated air drops of food by the Royal Air Force over German-occupied Dutch territory. On April 29, 1945,        Operation Manna involved 242 Lancasters to drop the food and 8 Mosquitoes to mark the drop zones. 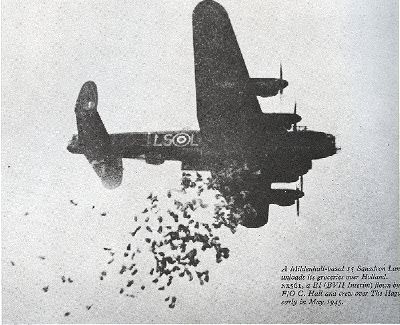 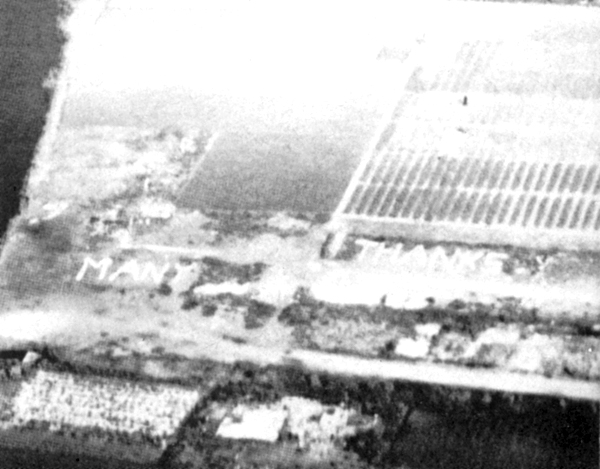 Operation Manna:
"Many Thanks" spelt-out in tulips, Holland, May 1945.

The Germans decided that anti-aircraft guns would be placed near the four food drop sites. That way they could react immediately if it turned out that the Allied aircraft dropped paratroopers instead of food. SD'ers (The German military police) would take samples of the dropped packages to verify that it was indeed food that was dropped and not guns or other sabotage utilities.

During the next week over 3,000 sorties were flown dropping some 7,000 tons of food to the Dutch. As of May 1 the American Air Force flew 2,200 sorties, dropping a total of 11,000 tons of food in the ten days of the operation. Listen to CBC Reporter relaying the story: http://archives.cbc.ca/war_conflict/second_world_war/clip/11550/

As Mom was paralized she could not walk, let alone run to the food drops, but my brother (now 69 but 4 1/2 at the time!!) remembers the following as if it happened yesterday: "I remember the morning clearly that my grandmother, listening to the radio, heard that in the next half hour the bags full of flour were going to dropped right across the canal where we lived. Excitedly she picked me up and together we ran to the edge of the canal. I can still see them coming, the allied bombers, indeed flying very low and very slow and then all of a sudden they started dropping the bags into the fields across. Wave after wave came down. When I looked at my grandmother I saw that her eyes were wet from crying (silently). She hugged me and said "now we will survive and the war will soon be over?. The bags were collected by the Dutch authorities and the flour was correctly and honestly distributed amongst the hungry population. I remember till this day how the bread, baked at home from this flour, tasted. Wonderful! A week later the empty bags were made available to the people. Many made clothes out of them. My grandmother kept one bag intact to remember this unique moment in her and our lives.  I will cherish it for as long as I live". 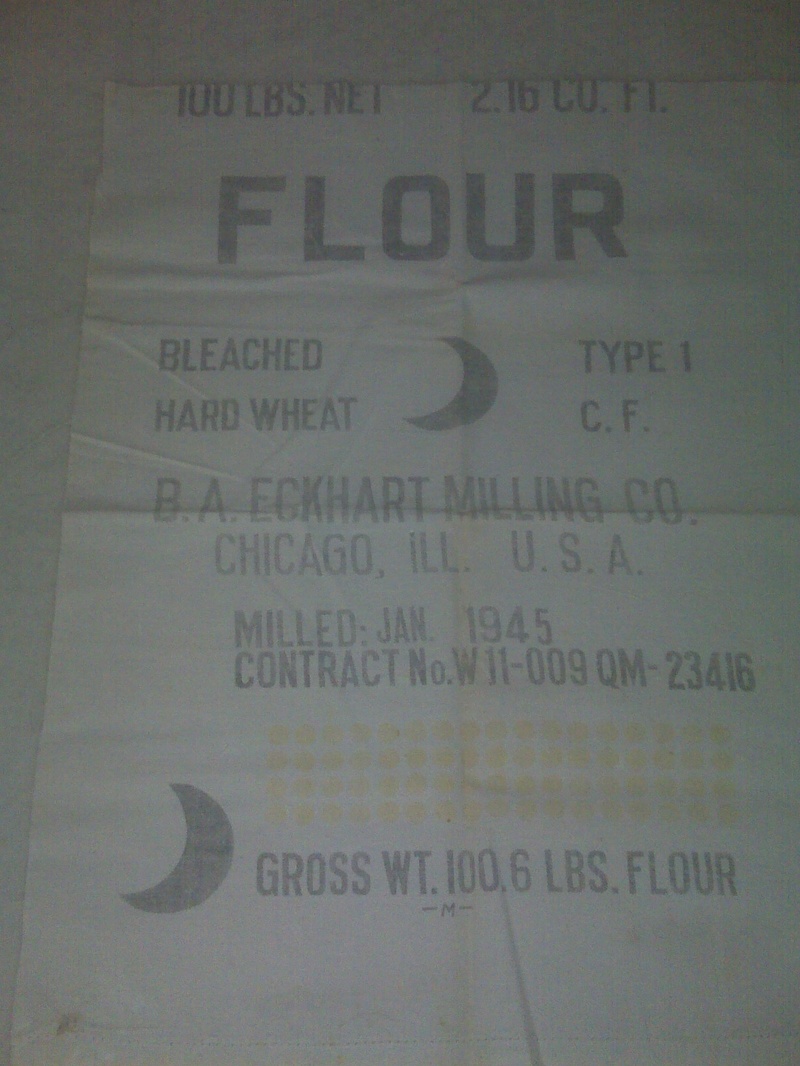 I still have that American flour bag in our home in Tenants Harbor, Maine.    American flour from the B.A. Eckhart Milling Co. in Chicago, ILL. U.S.A., milled: Januari 1945.  Oma baked bread from that flour which saved my Mom's life which made it possible that I was conceived and born shortly thereafter, in March 1946.

THANK YOU, America for that bag of American flour which saved my mother's life and gave me mine.

To go to the next chapter, please go to the top of this page, in the left hand column and click on: ""Oom Boebie" in Dachau"