On May 10, 1942, Bodo Sandberg set out on his second attempt to reach England, this time with F.A.A.M. Janssens, J.W.Th. (Jan) Bosch and A.C.H. Kanters. By now the underground resistance was better organized and on their way from safe house to safe house, there were no traiters, no arrests and no German camps. This time they went through Switzerland where they had to "earn their keep" through tough labor camps. The Swiss indeed were tough but so were the times and the Swiss did help them through. I still remember pictures of Dad and Jan Bosch digging trenches with pick axes, but also one on a sunny terrace at the famous "Saipa" Italian Ice-cream parlor, overlooking picturesque Lake Lugano: life was looking up! (When you see that picture it's hard to imagine there was a war on...).

In the late '90s the media grilled Switzerland for the things Switzerland did wrong during the war ("Jewish gold", etc.). During one of the media briefings in New York City I stood up and said: "If Switzerland did anything wrong it should be given an opportunity to rectify any wrong they did, if at all possible, but Switzerland also did many things RIGHT during the war. I admire the Swiss and am thankful for that. Thanks to Swiss help, my Dad made it through the war. I was born in 1946. I owe my life to Switzerland (and America - of course). Thank you beautiful Switzerland! And, Thank you (with a Capital "T") great USA!"  The journalists had not wanted to hear anything positive at all about Switzerland. The Press was out to put Switzerland through the meat grinder... There was a moment of stunned silence in the audience... Then one person stood up to applaud my comments and, seconds later, the entire audience got up and gave a standing ovation to the Swiss Ambassador!

FEAR, every step along the way!

On February 15, 1943 Jan Bosch and Bodo Sandberg left Switzerland. This journey was again illegal and they reached Perpignan in the morning of February 17. They left on the 19th and succeeded to cross the Pyrenees Mountains with the help of a guide. The route had been prepared by the Dutch resistance organization, who even provided them with counterfeit French IDs. In Spain on February 22, on their way to Barcelona, near Gerona, however, they were caught and put under house arrest in a Hotel. They contacted the Dutch Authorities and were allowed to travel to Madrid on March 4 where they arrived on March 5. With help from the Dutch Consulate in Madrid, they continued on to Lisbon from where, two days later, on May 8, they flew to Bristol, England.

I remember Dad telling how frightening it was every time they had to cross a bridge - and there are countless bridges to cross between Holland and Spain..... There were German sentries on virtually every one! And, just before the end of their long journey, the biggest hurdle of all: They had to - clandestinely - cross the Pyrenees Mountains to go from France to Spain! They needed a reliable guide, and you never know if the guy is "good" or "bad"... Luckily they found a "friendly" and they made it across. From there it was on to Madrid where they reported to the Dutch Embassy where Ambassador Jhr. van Panhuys extended a warm welcome and helped them on to Portugal. Amazingly, decades later, when we lived in New York, one of our - almost - neighbors was Jan van Panhuys, a fellow banker at Rabobank New York, the son of the Ambassador who helped my Dad...! (Small world...)

From Portugal they could fly to England and, when they finally arrived there, they realized it had taken them a year, from beginning to end, and - worst of all - they weren't at first welcomed with open arms! They were interrogated by counter intelligence specialists to find out if they weren't Nazi infiltrators....  Quite a cold shower after all they went through to get there. But, in May 1943, when they passed all the testing and scrutiny, they were welcomed in the Netherlands House in London, By Queen Wilhelmina herself!! 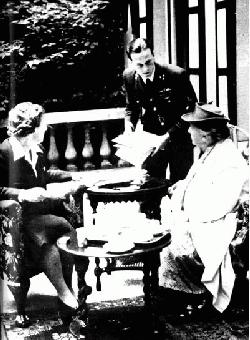 The "fearless four" were split up

Two of the four Pilots, including Dad's best friend Jan Bosch*, stayed in England and flew missions in "Mosquitoes" over occupied Holland and enemy Germany. Jan Bosch, already 27, was really too old to fly for the RAF. But he persisted. After further flight training he made his first war flights during D-Day. On August 14, 1944 he flew over Berlin for the first time, not as "fighter pilot", but - even more dangerous - as "pathfinder". Jan, in his mosquito, marked targets for the bombers who followed him. In similar missions he flew over Osnabrück, Hannover, Cologne, Mannheim, Stuttgart and Kiel. He flew and survived 61 bombing missions! Jan Bosch ("Oom Jan" was my favorite "uncle" when I was little) was not only one of Holland's most talented pilots (after the war he became one of KLM's lead pilots and had the honor to fly KLM's most important route Amsterdam/New York on 747s),  Jan Bosch was also very handsome... frequently women - complete strangers - would walk up to him, convinced he was Cary Grant....!

Bodo and Jan stayed best friends for life until, almost half a century later, they both passed away peacefully, with only a year or two in between, Jan Bosch in The Hague and Bodo in Bentveld, quite close to each other. Dad lived to celebrate his 90th birthday!

To go to the next chapter, please go to the top of this page, in the left hand column and click on: "Jackson, Mississippi, USA"