In 1971, after I had finished high school, completed my Military Officers’ School, served in the Army, tried - and failed - to study at the TH in Eindhoven, worked for an American Cosmetics Company in Holland, and finally joined ABN Bank, was trained in International Banking, and became a Banker, ABN sent me abroad to Argentina as an Expatriate.

There, one day in Buenos Aires, one of my clients asked me for help regarding something with a shipping company. My Spanish, at that time, was “OK” but not quite perfect yet, so I called a Dutch Shipping Line and asked for someone who could speak Dutch. A gentleman came on the phone saying: “This is Rolf Janssens. How can I help you?” Now “Janssens” - at least “Jansen” - is a common name in Holland. It’s like “Johnson”. Sure, Janssens (with three “s”-es) is unusual but I did not think anything of it. I introduced myself: “This is Job Sandberg, from ABN Bank, can you please help me with this shipping question?” “Sure” he said, “I’d be glad to. But, before I do so, I have one question to you. You said your name is “Sandberg”. Sandberg is not a common name in Holland. Are you, by any chance, related to “Bodo Sandberg”?

I was astonished. A complete stranger on the other side of the planet asks about my Dad...

Now it was his time to be astonished with the coincidence and he explained why: “Bodo Sandberg was one in a group of five fighter pilots who managed to escape from occupied Holland and made it to England...  My father was F.A.A.M. Janssens and he was also one of the five, just like your father. Except I never met my father again. He perished in the war. My father did not come back”.

"Bodo Sandberg is very special to us because, when he came back from America, he not only brought a package of American “goodies” back for his own wife and son, he also brought such a fabulous package - personally - to our home, for my mother, my younger brother and me.. Bodo tried to fill the void of his fallen friend, my father...."

My Mom and I admire "Uncle Bodo" for the true Officer and gentleman he is”.

Unbelievable, 26 years later, 18,000 Km away from Holland, on the other side of the planet, in Argentina, the sons of these two heroes run into each other, by pure coincidence!!

It goes without saying that Rolf and I became very good friends, just like our Dads were.

And it became even more amazing

The peculiar thing about my encounter with Rolf was that I cannot recall he ever mentioned where or when his Dad was killed. It wasn’t until years later that my wife, while she was out on a business trip for Rabobank Nederland, New York, happened to find out about Jackson, Mississippi....

Her largest client, in the Agri Business Rabobank specializes in, was the largest egg producing company in America. Over time, she had become very good friends with the CFO of that Company. So good that, when the CFO, Bobby, found out she was Dutch, he mentioned to her that, during the Second World War, there had been a large Air Force Base in Jackson to train Dutch Pilots. Bobby also remembered that some of those pilots, in their low-flying training flights, there had been in serious accidents and a number of them got killed. And so, one day, Bobby took my wife out to the honor cemetery where they were buried.

My wife was of course impressed by, and sad for the fallen pilots, but at first she didn’t connect with what she had just seen and learned.

When she came home with that story, I called my Dad in Holland. I said “Dad, Sascha was in Jackson, MS. Does that ring any bells with you? Wasn’t that where you trained during the war? There is also a cemetery at that Air Force Base with fallen Dutch pilots. Do you know anything about that?”

And Dad came back: “Yes, during the war the Royal Netherlands Military Flying School was based in Jackson. That is where I trained on US fighter planes”.

In 2008, when I was out on a business trip, and had to travel from New Orleans, LA, to Birmingham, AL, rather than flying, I drove the distance and stopped on the way, in Jackson, MS, to see the airfield and I tried to imagine how it must have been for Dad and Faam when they served there.

I also searched for - and, in the end, managed to find - Cedar Lawn Cemetery, where I stood still for a full minute in silence, just like we did with Dad on the dunes on the 4th of May every year on the Dutch National day of mourning, to honor our fallen Heroes, and I paid my last respects to Rolf Janssens’ Dad, Faam, who rests there in peace after he paid the ultimate price for the freedom and peace all of us still - and so much - enjoy today. 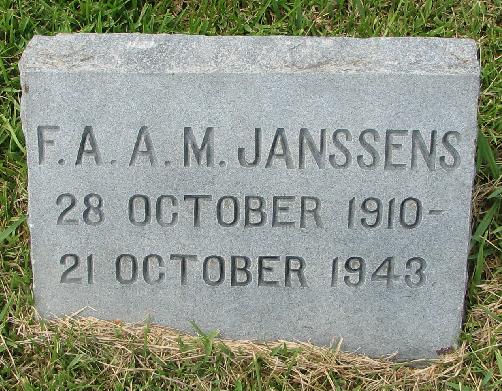 I could almost feel that my late Dad and his friend Faam were there with me during that deeply emotional minute in the sunset. 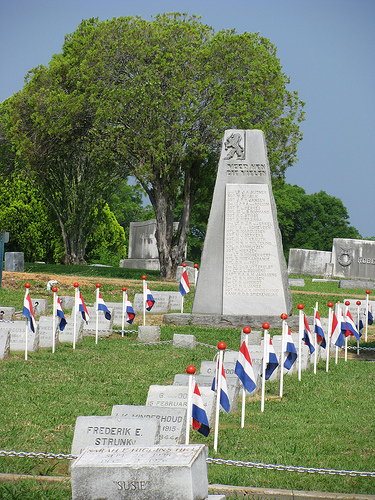 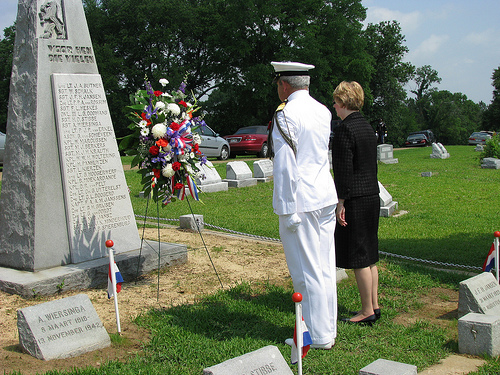 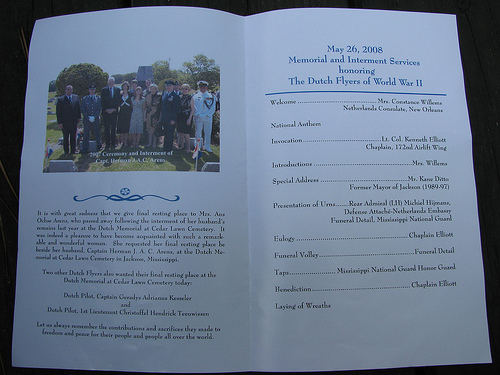 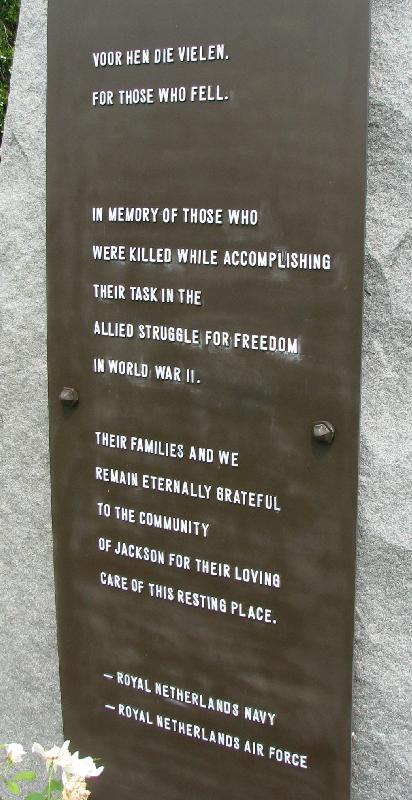 By: Jhr. Job B. B. Sandberg, son of Jhr. Bodo Sandberg

The help of, and gracious editing by Rolf F. Janssens, son of F.A.A.M. Janssens

Pieter Hans Hoets, himself an "Engeland Vaarder". Hoets was knighted at 26 by Queen Wilhelmina for his brazen bravery as a member of the Dutch Resistance during World War II. Those activities - filled with escapes and espionage - are recounted in his book "Vrijgevaren". He also wrote "Englandspiel ontmaskerd", "Spookspoor naar Moskou", and "De Yale Connection".

To go to the next chapter, please go to the top of this page, in the left hand column and click on: "Videos, websites and photos"